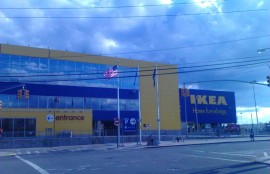 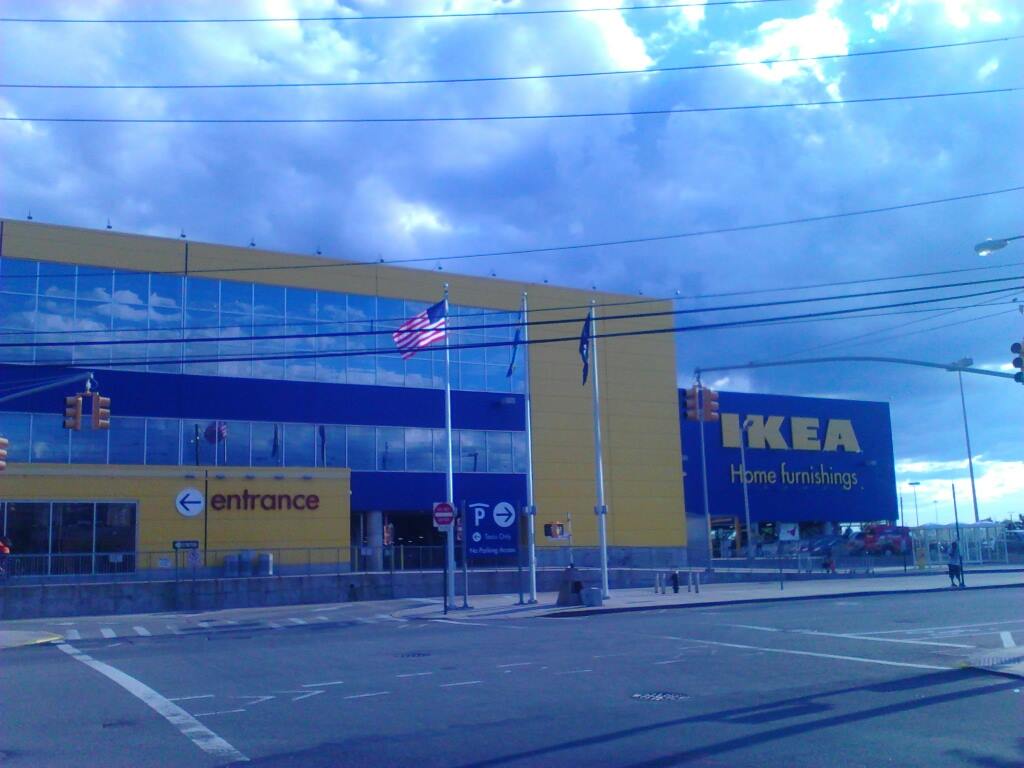 I have always been an avid fan of Ikea. A huge promoter of Ikea products amongst my friends. I very much valued the Ikea brand. I suppose that’s why what has happened to me has surprised me so much.

Ikea has taken the world by storm with it’s innovative furniture designs at affordable prices. The popularity of Ikea has grown and grown over the years. According to Wikipedia, in January 2008, Ikea became the world’s largest furniture retailer. Last year, Ikea’s founder Ingvar Kamprad, was listed as one of the world’s richest people. Ikea’s total assets value at around €42 billion. With a company this well off, why is it that I’m left high and dry?

Up until recently, I had always purchased Ikea products in store and had the means by which I could get it all home myself or with a friend. On this occasion, I had spent a small fortune kitting out my new bedroom in Astoria, Queens with bulky items such as a bed, a desk, and a shelving unit and I didn’t have the luxury of a ride home so I opted for the Ikea Home Delivery Service. BIG MISTAKE.

Although I wasn’t enamored by the customer service I received in the Brooklyn store, my experience would have been a whole different story if I’d been able to take it all home myself. It would have saved me a hell of a lot of bother. ANYTHING would have been better than going through what I have gone through in the last few weeks.

Move date for my new apartment was set for 1st August 2014 so I booked my Ikea furniture to arrive that same day. I had rented an unfurnished room so would need my new Ikea bed to sleep in that very night.

The delivery date came and I was so excited at the thought of finally setting up my room the way I wanted it. The process of moving across the seas from the U.K. to the U.S. meant that I hadn’t had a proper bedroom for months. Suffice to say, it was going to be a huge relief for me.

I arranged to leave work early to expect the delivery. The delivery arrived. And this is where the issues began to unfold…

ISSUE NUMBER 1 – LESS THAN HALF OF MY GOODS WERE DELIVERED: Missing from the delivery were – my desk, my chair, my bed, my mattress, my shelving unit, my chest of drawers and my rug. The delivery man exclaimed that these items had been ‘forgotten to be loaded onto the truck’ at the Ikea branch. I phoned ikea to try to rearrange the delivery but was told that I would be contacted at some point within 72 hrs. So, the main problem for me now was – where am I going to sleep? I didn’t have a bed.

ISSUE NUMBER 2 – 2ND DELIVERY ATTEMPT WAS NOT COMMUNICATED TO THE CUSTOMER IN ADVANCE: The next day, the delivery company (which by the way is a separate company to Ikea) attempted to deliver my missing items but didn’t tell me in advance. With no prior notice, they phoned and left me a voice-mail message to say that they were already outside. Ummm… I wasn’t at the property due to the lack of bed and didn’t receive this message until it was too late. I don’t understand why no-one told me in advance that they were coming?

ISSUE NUMBER 3 – DELIVERY ARRIVED WITH OTHER CUSTOMER’S GOODS: I finally managed to receive the 2nd half of my delivery two days later. I had ordered a queen sized bed. It came in separate parts – the headboard and footer, the bed sides, the mattress and the wooden slats that go underneath. As soon as my bed was delivered, I noticed that not only were the sides of the bed of an incorrect size (full/double) but they also quoted a different customer service reference number. How was I delivered someone else’s order?

ISSUE NUMBER 4 – INCORRECT INFORMATION GIVEN BY DELIVERY STAFF: The delivery man assured me that the bed sides of a full/double bed were the same length as a queen bed. So that evening, I assembled the bed only to find that the mattress didn’t fit in the base. I later looked up the measurements online the Ikea website and found that the length of the double/full sized bed is shorter than the queen bed by 9cm. So I was given the wrong information here which has been a waste of my time because I then had to take the bed apart again.

ISSUE NUMBER 5 – DELIVERY ARRIVED WITH DAMAGED GOODS: As I began assembling the rest of my furniture, I realised that both my desk and my shelving unit were damaged. The shelving unit has a huge dent in it that appears to have occurred during the course of the home delivery as the very same dent actually appears on the cardboard box that it was delivered in. One of the parts of the desks has a huge crack across it.

ISSUE NUMBER 6 – APPALLING CUSTOMER CARE LINE:  I have tried over and over again to resolve my outstanding issues using the Ikea Customer Care Line with no success. For a start, wait times are astronomical. They really need a call back system in place because I have waited to speak to someone for over an hour on multiple occasions. It’s been extremely frustrating because when I have finally got through to a person, they have often put the phone down on me before I’ve even said two words and after an hour of waiting it’s infuriating. I’ve no idea why they’ve put the phone down but it has happened so many times that I have begun to think it’s deliberate. When I have actually got through and spoken to people they have been incredibly unhelpful.There have been a couple of saving graces that I’ve had the luck to speak with but they have been few and far between and then the issue is that you leave your problem with them and never hear from them again. There’s also no way in the world that you’re able to get back through and speak to the same person. So, feeling at my limit, I resorted to putting myself through to the operator in the attempt to speak to someone with authority. Most of the time, I was then put on hold for eternity. It seemed to me that this was in the hope that I would give up and put the phone down myself. It was useless. I was going around in circles. A huge waste of my time and energy.

ISSUE NUMBER 7 – MULTIPLE CUSTOMER SERVICE EMAILS: I gave up trying to resolve things over the phone and instead found a customer service email online the Ikea website. I emailed and thankfully 3 days later I received a call. I explained to the Customer Service Representative that after all my troubles I just wanted the bed sides replaced with the correct size and a discount for the damaged goods. He explained that in order to receive a discount for the damaged goods I would have to contact someone else and wait another 3 days. Why? Why can’t it be resolved in one place for me? This wastes more of my time when it’s not my fault it was damaged.

ISSUE NUMBER 8 – DELIVERY DIDN’T SHOW UP: The Customer Service Representative had arranged that the bed sides would be exchanged with the correct size the following Monday. So, not knowing at what time I would expect the delivery, I arranged with my boss that I would spend the day at home. The delivery day came, and I phoned Ikea to confirm the time of delivery. After an hour trying to get through to someone, I found out that supposedly my order wasn’t down for delivery (but oddly the delivery company had it scheduled for that day but just didn’t have the item in order to carry out the delivery). The person I spoke to could not confirm either way if the delivery was going to take place and did not wish to guarantee that anyone was even going to call me back to confirm if the delivery would occur that day or not. This was one of the occasions that brought me to breaking point as it was ridiculously unhelpful, so I started to cry and I begged the lady to promise me that she would call me back. All I wanted to know was… ‘yes’ or ‘no’. I waited all day. No phone call. No delivery. Nothing. Again, waste of my time.

ISSUE NUMBER 9 – BROKEN PROMISES: So, not only was my scheduled delivery not scheduled but no-one from Ikea Customer Service called me back to confirm either way. Over the course of the next few days, I made further attempts to resolve the exchange of my incorrectly delivered bed sides. I spoke to a number of additional Customer Service Reps who promised to call me back to advise on the situation and never did. One of them did call back once and left a message to say that they would call me the following day to confirm everything but then I heard nothing more from them.

ISSUE NUMBER 10 – WASTE OF TIME: I am guessing that I have spent in excess of 8 hours on the phone to Ikea trying to resolve my issues. I have wasted time assembling furniture that I’ve then had to take apart again. On top of that, I’ve had to wait in for the delivery company three times. It should not take this long to resolve such a simple straightforward thing. But not only is it a waste of time for me, it’s a waste of time for Ikea’s business. The hours spent on the phone, the number of times having to return to my property.

My issues are still not resolved.

I understand that people make mistakes, none of us are perfect, but too many mistakes have been made here. It’s been one thing after another. I don’t understand what the problem is? Is it the delivery company? Is it a lack of staff training? Is it perhaps the fact that Ikea are not hiring a sufficient number of staff to cope with the demand? Are the staff at Ikea Brooklyn ridiculously overworked and underpaid to the point that they just can’t cope or don’t care anymore? What is it? What’s the truth? There is definitely a problem here. It’s not right that I should be treated like this. I feel really messed around. Does buying furniture at affordable prices necessarily mean bad customer service? Do we have to put up with this? Am I supposed to just ‘make do’ with sub-standard damaged furniture and an ill-fitting bed?

I am disappointed with Ikea. This really has been the worst customer service I have experienced in my life. I have never known such a lack of care and attention. It has really upset me to the point of writing this blog post. I cannot seem to get an answer from Ikea.

I’m sure I’m not the only one that has experienced frustrating customer service like this. How do we as consumers handle this kind of situation? Do I really need to post my complaints online for all to see in order for Ikea to sit up and take note? It shouldn’t be this way. It shouldn’t be this hard.