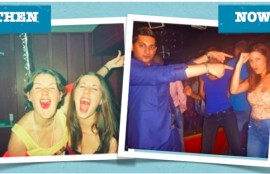 Clubbing in your 30’s

People think that when you hit 30, life slows down…. for me, this hasn’t been the case. I’m 33 and I still love going out. I love going dancing. I’m free and single and I don’t have any children yet.

I party with the best of them.

But when I do go out, I see the world in a very different way to how I did 10 years ago. 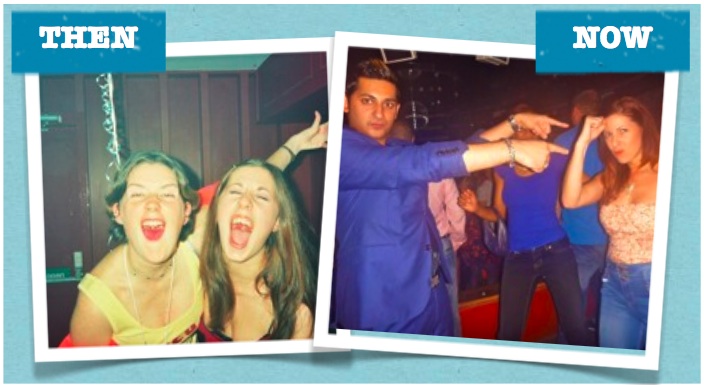 So what are the key differences?

For a start I dress differently…

ATTIRE – 10 years ago I was a lot more scantily clad with ridiculously uncomfortable high heels. I felt that that was part and parcel of going out. Now, I seem to be a lot more sensible. Yeh, I still attempt to look ‘sexy’ but I wear my more ‘sensible’ heels, or else I put flats in my bag for later. I always wear a coat and I choose an outfit that covers up more flesh… well, I mean I make a choice between cleavage and legs..never both!! 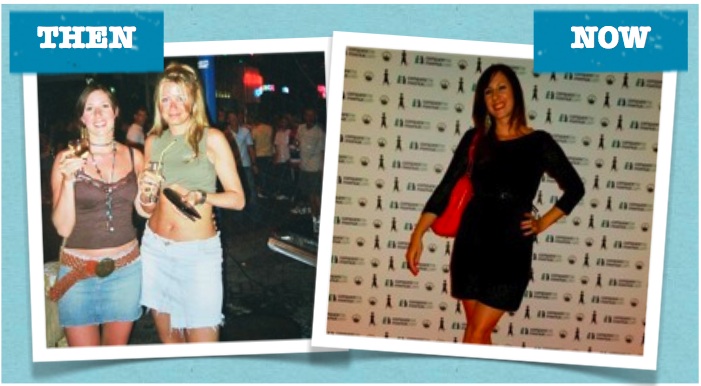 HAIRDOS AND PUTTING THE ‘SLAP ON’ – I think when I was 23, I was pretty crap at doing my hair and make up. Often I’d go out the door with half wet, half blow-dried hair. I would wear the same make up day in day out, night or day, I didn’t really have a clue what suited me or what sort of make up went with what outfit. Nowadays, if I go out, I try and make more of an effort with my hair, I sometimes actually style it! I am more experimental and I try to co-ordinate make up that looks more striking with the outfit i’m wearing.

IN THE BAR – At age 23, I loved a packed bar, I thought it was great atmosphere. Now, without a doubt, I still like somewhere with atmosphere, but there’s gotta be a seat and I’ve gotta hear myself think. When the music is so loud that you have to shout to hear each other it gets on my wick. I’m forever going ‘What?’ and I complain of a sore throat. It’s not as if this never happened when I was 23, it did, but I was less bothered by it back then. I find myself moaning about these things more and more now rather than just putting up with them. 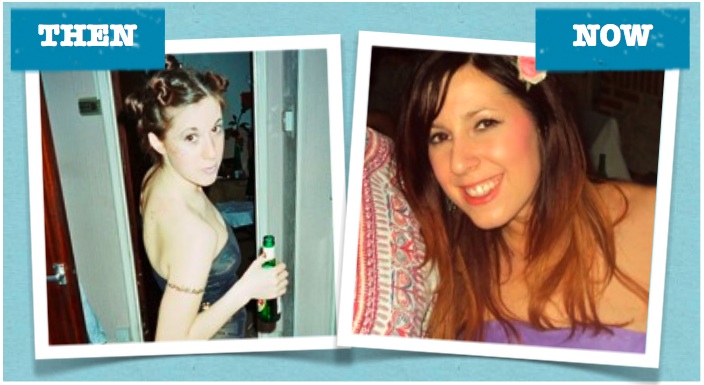 IN THE CLUB – A packed hot sweaty club never used to bother me. Nowadays, I find I have no patience. At age 23, I was absorbed in the moment, and would dance the night away without any cares in the world. Now, I find myself commenting…. ‘Isn’t the music loud?’ ‘Why don’t they have the air-conditioning on?’ ‘I’m sweating’ ‘Why are there so many people in here?’ ‘Oh hey, nice chandelier…’

I loooooved clubbing at age 23. It was the best thing in the world because (a) I loved dancing and (b) I loved the attention I got from boys. At age 33, I still loooove dancing but I’m very selective about which clubs I wanna go to. The main reason for this, is not because of the music as you’d expect, although it plays a part… The main reason is the clientele. There are so many people nowadays in clubs that p*ss me off! It’s mainly drunk people admittedly, and mainly men. Sorry guys, but when you’re in clubs and you’re drunk, some of you, are reeeally annoying! I’ll give you a few examples of the types of guys us women have to deal with on a night out….

1. THE CREEPER – That guy that just doesn’t leave you alone, follows you around the club, watching your every move. It’s creepy, either come up and say something or leave us alone. Stop with this freaky behaviour!!

2. THE DRUNK GUY – There is always that annoying drunk guy that approaches a girl and thinks he’s saying something cool or funny… maybe it was, but you’re slurring and I can’t hear a thing. Plus you had a curry earlier so you’re breathing your curry breath all over me. It’s not nice.

3. THE OVER-FRIENDLY HANDS GUY – That guy that immediately starts putting his hands on you…now it may just be on the small of your back, and it’s not a sexual thing, but it’s NOT called for when you’ve hardly said 2 words to us. Just don’t touch me! I need my personal space! Maybe later on, if we get on well, then, and only then, can you start putting your hands on me. But for now, nooo! Ewww! Stop!

4. THE UNEXPECTED SPOON DANCER – This guy, is someone who has annoyed me since I was first clubbing at age 18 and I have never understood why these guys do this, I find it THE most annoying thing a guy can do to you in a club. They come up behind you and spoon dance you… completely unannounced… you haven’t even said hello, we haven’t even seen your face. You guys just come from nowhere and start rubbing your bits against us from behind. This is NOT the way you ‘pull’ a lady.

5. THE GEEK THAT GOES ON AND ON – Always, without fail, some little geeky guy will come up to you in the club and try to pull you. No offence geeky guys.. you’re probably very nice people but we’re just not on the same wavelength are we? You don’t know how to talk to girls. You start talking to us about something YOU’RE interested in and you haven’t checked whether WE’RE interested in it too… and 9 times out of 10, possibly even 10 times out of 10… we’re not. And yet, you bore us to death with your 30 minute monologue about ‘Games Workshop’ and how you hand painted 200 little figurines yourself (OH MY GOD THIS IS THE DULLEST THING IN THE WHOLE WORLD… I REALLY DON’T CARE!!! HOW DELUDED ARE YOU TO THINK THAT ANYONE WOULD BE INTERESTED IN THIS??), …until you realise we’ve either fallen asleep or we’ve already walked away.

6. THE RUDE BOY – Last night, some guy stepped on my foot on the dancefloor. Stepping on my foot was obviously an accident..it is more the fact that he didn’t say sorry that irks me. So rude! It’s still hurting now and I have a bruise for god’s sake, not on! The ‘Rude Boy’ doesn’t just step on feet, he also typically pushes passed you, spills his drink over you, or annoyingly knocks your drink over… and there is never an apology. When you look at them in disgust, they respond with a look that says ‘So?’.. ‘And?’. This type of character comes in a male and female variety.

7. THE TOO COOL FOR SCHOOL DUDE – You know the type, he wears sunglasses and a leather jacket in a hot dark club. He looks cool but he’s actually probably really sweaty under that jacket… (didn’t think it through did you?) He will never catch your eye coz he’s just too cool for that. What’s the point??

8. MR ARROGANT – He’s quite similar to Mr ‘Too Cool for School’ except he is more blatant. He clearly thinks he’s the best… best dressed, best dancer… and he thinks that all the girls fancy him…and maybe they do, but arrogance is NOT attractive and is enough to put anyone off. The worst variety of this character, is the man that thinks he is ‘all that’, when he is so far from it it’s untrue. All I can say is, ‘oh dear’!!

9. THE CUTE GUY IN THE CORNER – You know, the one that you have your eye on all night and he never comes up to you but his friend does. Damn it. Haha.

So I’m kidding about that last one, I know I would have the power to approach the cute guy in the corner if I wanted to. But, to be honest with you, most of the time, I just can’t be bothered. I think perhaps I’ve become a cynic in my old age and no longer believe it’s possible to meet the man of my dreams in a club. When I was younger I was easily disillusioned, ‘He’s gorgeous, he could be the one!!’ ..He never was. He was usually just after one thing…and over time, that just gets boring, it’s meaningless… but that is what you should expect from meeting someone in a nightclub I suppose! 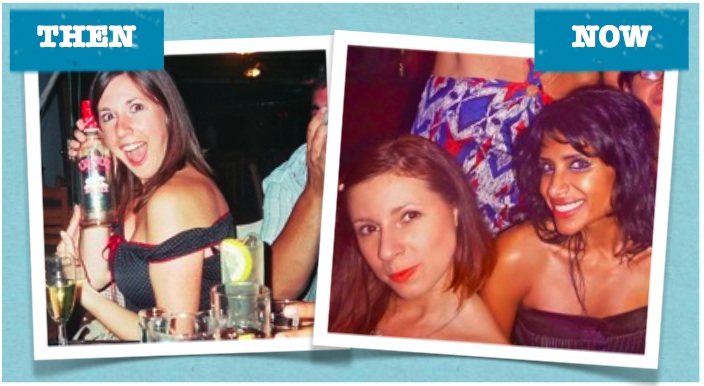 Perhaps I’m just a bitter old lady nowadays? But all these things, really do get to me when I go out. I just wanna have a good time with my friends! I just wanna dance like it’s 1999…

Literally…I wish I could dance like it was 1999… I had more energy back then.

How hard can it be to create the most perfect venue and clientele for 30 year olds? Is it possible? Or would we still find something to moan about?